Caps and Mittens (used to be Smaller Garments) 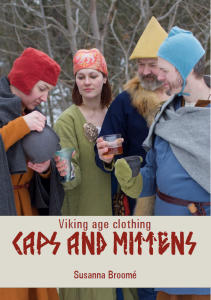 New patterns in the booklet is an additional interpretation of the pointed cap from Birka and two interpretations of the pillbox cap from Haithabu. In the old issue you could find a hood and a pair of socks from Skjoldehamn. These are removed because they probably are too late for the Viking age.

See Bibliography for the total bibliography. For resellers see Links.

As opposed to most of the other booklets, these patterns are in full size, scale 1:1, on a separate sheet.

Pattern in four sizes based on four different finds.

The cap from Dublin is totally based on a number of finds from Viking settlements in Dublin, York (picture) and Lincoln, most of them from Dublin (Wincott Heckett, 2003). They are all from the British Isles but within a clear Viking context. It is very hard to identify similar caps in pictures, but looking at clothing history they might be connected to the coifs from especially the 1200s.

Because the caps are not grave finds we don’t know if they were worn by men or women. On one of them there is a reparation on the ”wrong” side (Wincott Heckett 2003, 44-46, 59), which might indicate that they were worn under another headgear, something which was common for similar simple caps during later periods.

Materials: All caps in Dublin are made from thin, quite loosely woven wool, woven to the right size, or in a similarly thin and loosely woven silk, both in tabby. Wool is more common than silk (Wincott Heckett 2013, 44, 89-96). The caps in York and Lincoln are made from the same type of silk (Walton Rogers 1989, 360).

Round Cap from Birka

The round cap from Birka is based on finds of tablet-woven braids in some of the graves in Birka. The rest of the shape is unknown but based on the silk remains in grave 944 (picture) it should have had a rounded shape that fits with the four-panelled caps from Moshchevaya Balka. Therefore I have used them for the reconstruction.

Materials: There is very little left of these caps in Birka, only small silk remains, and in a few cases wool remains, in connection to the metal decorations (Hägg 1986, 65, 70). The caps in Moshchevaya Balka are all made of silk woven in samitum, a complex patterned twill (picture). In the Birka case we know nothing of the lining, but all caps in Moshchevaya Balka were line, in at least one case with fur (but no fur edging). Unfortunately I have not found out the materials of the linings, but they look like thin silk on the pictures. The tablet-woven braids in Birka are normally made of silk with brocaded patterns in drawn silver thread. The posaments are made of silver thread.

The pointed cap from Birka is based on several finds of tips and hanging ornaments at the heads in Birka (Hägg 1986, 70, picture).  A number of Viking age pictures and figurines (picture, picture) support the interpretation of a pointed cap, even if it is possible that they depict helmets instead.

This cap seems to have been worn mostly by men, but it might be possible that remains have also been found in at least the woman’s grave 750 in Birka (Hägg 1986, 65). In the Icelandic sagas a ”Russian cap” is mentioned several times. It is often interpreted as a pointed cap (Zanchi 2009), probably of this type. In the sagas this cap is always worn by men and the same counts for the pictures and figurines.

Materials: On the metal parts connected to this cap in Birka remains of silk have been found (Hägg 1986, 70). No remains of wool have been connected to this cap, but that might be coincidence. The pointed cap in Moshchevaya Balka is made of silk woven in samitum (picture). Just as with the round cap we don’t know if there was a lining in Birka, but the cap in Moshchevaya Balka is lined. To get a standing cap an interlining might also be needed. There are no finds of an interlining so that interpretation is solely based on practicality. 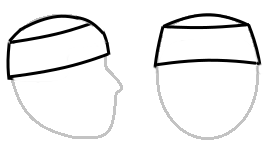 The pillbox cap is based on a fragment from the settlement area in Haithabu (picture). It is made of wool fabric, napped on both sides and with a pile on one side. The pile is on the same side as the seam allowances which by Inga Hägg is interpreted as the right side. I would rather believe that it is the wrong side. The mitten from Akranes below clearly has the pile on the wrong side, and it is a good way to make the garment warmer. The fragment consists of a rounded and a straight piece sewn together, which is consistent with a pillbox cap and I believe that the napping and pile strengthens that interpretation, but we don’t know anything more about its shape. 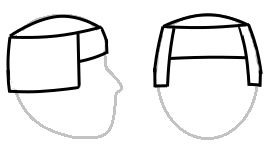 In the Netherlands several complete or almost complete caps have been found, mostly dated to the Vendel period or Viking age. One of those is a simple pillbox cap from Leens (above, also see picture) with a shape that is very similar to the pillbox caps from Greenland (picture). Another of the Netherland caps, from Aalsum (to the right, also see picture), has a different bottom line with an opening for the face which must have been very warm and cosy. The same type of opening can be found on caps from Moshchevaya Balka (picture). Both are possible interpretations of the Haithabu fragment.

The mittens from Akranes are based on a find of an almost complete mitten from the 900s on Iceland. Sewn children’s mittens have also been found on Iceland, but I have here only used the adult sized mitten (Lehmann-Filhes 1896). The mitten from Akranes is really modern and advanced in its cut; it fits the hand very well and gives a good mobility. It is a good alternative to the needle bound mittens which were more common.

Materials: The mitten from Akranes is made of coarse, tightly woven wool with a pile on the inside (Guðjónsson 1962). It must have been really warm and soft when it was new.