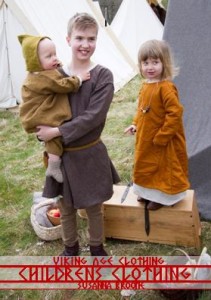 The following garments are described in the pattern booklet Children’s Clothing. See Bibliography for the total bibliography. For resellers see Links.

The patterns for children’s clothing can be found for the sizes 74-80 centilong up to 134-140 centilong. 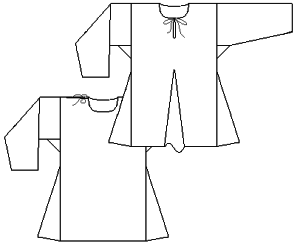 That children wore tunics, just as the adults, is almost self evident. The tunic or frock was a typical garment for children all the way up to the 1900s. Smaller children probably only wore a tunic and maybe a pair of leggings together with the diapers, just as they did much later in history. We know nothing about the length of tunics for different ages of children during the Viking age. It may have varied with both age, sex and social status.

This type of simple serk/shirt/tunic has been found in archaeological finds both before and after the Viking age and is the most probable to have been used for children too. There is also a textile fragment from Haithabu which had been interpreted as remains of a possible child’s tunic of this type. The measurements fit well with the interpretation, but the shoulder seam would have been very thick and stiff. Personally I believe that the alternative interpretations suggested (a liripipe hood or a legging) are more unprobable. You find more information about the Simple Shirt/Tunic on the page Shirt and Tunic. 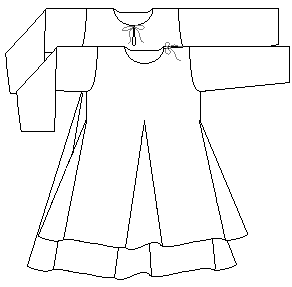 As I have written above, it is almost self evident that children used tunics. The next most used variety of tunic, after the simple tunic above, is the tunic with a fitted sleeve. It is possible that this type of tunic also could have been used for children, at least from the 900s and forward, even if there are no archaeological remains which can verify it. You can find mor information about the tunic with fitted sleeve on the page Shirt and Tunic.

Based on the assumption that children probably wore a dress similar to the adults, boys, at least from an certain, unknown age, would have worn trousers. If the trouser model was similar to adults’ trousers, it would have been based on this pattern from Thorsbjerg. Of course it may have been simpler than this too. There is a find from Elisenhof in northern Germany that looks like the leg of a pair of children’s trousers with a sewn sock fastened to the bottom. Nothing remains of the crotch, so it may be a legging instead.

Small children probably only wore socks or leggings under the tunic to simplify changing diapers and later using the chamber pot, but I have made the trouser pattern in all sizes available. Our modern diapers are much more secure and easier to manage the the ones used in the Viking age would have been, and are most probably used much longer. It is not certain that Viking children wore diapers at all regularly. You can find more information about the close-fitting trousers from Thorsbjerg on the page Trousers.

The cap from Dublin is one of the most well-known headgear from the Viking age. What is most interesting in this case is that at least one of the found caps has been adjusted to fit a child. The bands in the front have been moved upward to make it smaller. You can read more about the cap from Dublin on the page Smaller Garments.