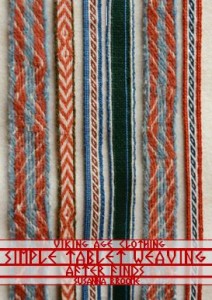 The following tablet woven bands are described in the booklet about Simple Tablet Weaving from Finds. In the booklet you can find quite a lot of information on sources, but there is not enough room for the level of detail that some of us want, so you will find those details here instead. See Bibliography for the total bibliography. For resellers see Links.

Most of the tablet woven bands that we know from the Viking age are made with a relatively complicated technique including an extra brocading weft, often in silver or gold, but there are a few bands made with the simple technique we most often see on markets today. This technique is more suitable for beginners.

I have only found four bands from the Viking age that with enough certainty belong to this type, where all tablets are turned together and there is only one weft. These four are found in this booklet. Except for these there are very fragmentary remains of a silk band in York that probably is made using this simple technique, and a wool band from Gotland which possibly is, but where I have not been able to find pictures that prove this.

This little band, about 9mm wide, comes from a woman’s grave in Kaupang. It was sewn to the hemmed edge of a piece of herringbone twill and was finished by a twisted cord on the other edge.

What remains are four warp threads of wool in each of the edge tablets, two threads in each pattern tablet and the weft. All wool yarn is very similar to worsted yarn nm 20/2, i.e. a thin but strong 2-ply yarn. The cord was made by the same type of yarn. There are no colour remains. Only a few centimeters of the band remain, but a row of angles and a double eye are clearly visible.

After having tested weaving the band, first with only wool yarn and then with two threads of linen in the remaining holes in the pattern tablets, my interpretation is that the band has also had a vegetable fibre in the pattern. With both linen and wool yarn in the warp, you can come very close to the look of the original band by turning all the tablets together. In the original band the edge tablet were turned individually without changing directions.

I have interpreted the band with one colour in the edges and another in the pattern. Since no colour could be identified this is a pure guess. I have also interpreted the pattern to continue in the same way as in the remaining centimeters, but it can of course have been much more complex.

Source: pictures taken in the museum at Reykjavik (picture).

This band was found inside a tortoise brooch in a woman’s grave, fastened along the outside edge of a twill fabric. That means that it should have been sitting along the upper edge of a smokkr. It was finished with two parallel woolen cords. I have no certain measurements, but the band was clearly much thicker and wider than the others.

What remains are four threads of wool in each edge tablet, three threads in each pattern tablet and the weft. All made of a single worsted yarn at least as thick as modern nm 6/1. There are clear remains of blue and red colour in the warp, the weft looks yellow but could very well have been undyed white wool originally.

In this case I have also woven the band with and without linen thread in the pattern tablets, using different qualities of thread. The pattern is only visible when the linen thread is included. For the rest, as above, with both wool and linen thread you can get very close to the look of the original band by turning all tablets together. In the original band the edge tablet were turned individually without changing directions.

The colour combination in my interpretation follows the find. I have interpreted the pattern so that it continues in the same way as in the remaining piece, but it could very well have been much more complicated.

This little (about 5mm wide) silk band from Oseberg is the most well known in the collection. It was probably fastened along the edge of a fragment of silk embroidery. The remaining fragments are in total 19.5cm long.

Here both the silk and the vegetable thread still remain. The weft is made of silk. All silk is in thickness comparable to sewing silk, dtex 300. The vegetable fibre is dark and strongly decomposed. There are no colour remains.

I have made my interpretation in Gütermann buttonhole silk, dtex 750, which makes both thicker and wider, but much faster and easier to weave. It is of course closer to the original to use sewing silk instead.

In my interpretation I have used bleached linen thread even though the vegetable thread in the find was dark. There are several reasons for this; linen fibres were rarely dyed during the Viking age, textile fibres normally darken during the later stages of decomposition, and the pattern is much more visible when a whiter fibre is used. I have also used one colour in the pattern tablets and another in the edge tablets, just like in the other bands. Since there are no colour remains this is a pure guess. 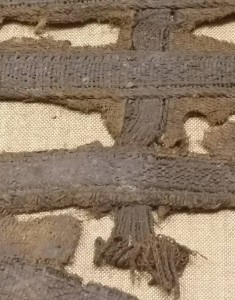 This little inconspicuous band has not been interpreted anywhere before. It belongs to a group of bands fastened on a piece of samitum silk which probably in turn was sewn to the front of a tunic in grave 735 in Birka. The grave is a double grave so we don’t know with certainty if the silk belonged to the man or the woman in the grave. This little band sat across and partly hidden under the others. All the other bands are similar to this, but brocaded, and probably everyone has assumed that this too was brocaded and not looked closer at it.

What remains are the silk warp threads. Here it is clear that a vegetable fibre must have been part of the band from the beginning since the weft is missing and there is a gap inside of the outermost edge tablets. Among the middle tablets one is turned oppositely to the others. It is not possible for us to determine if this is intentional or a mistake. There are no colour remains; the whole band is preserved in the silver oxide from the surrounding bands.