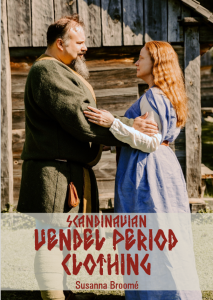 The following garments are described in the pattern booklet Scandinavian Vendel Period Clothing. See Bibliography for the complete bibliography. You can find resellers under Links.

To reconstruct Vendel period clothing involves even larger challenges than clothing from the Viking age. There are almost no archaeological finds, so you must to a larger degree use depictions and clothing history, i.e. see what can be found before and after the Vendel period, and also evidence from other areas of Europe.

Made according to personal measurements which means that the same pattern is suitable for both shirts/tunics for men and sarks for women.

The simple shirt or tunic is based on several finds of relatively complete tunics from Northern Europe. This has obviously been a very common type of tunic which, in varied form and with some development has been in use from the Roman Iron Age (Thorsbjerg picture and Lendbreen picture) and at least through parts of later Medieval times (). Sarks/shifts of the same simple cut, but longer, has been a part of women’s clothing at least from the Vendel period and up to the earlier parts of the 1800’s. From the Vendel period there is a tunic from Bernuthsfeld in Norther Germany (picture) and remains of a sark and a tunic from the grave of the Frankish queen Balthilde in Chelles in France (picture, picture). 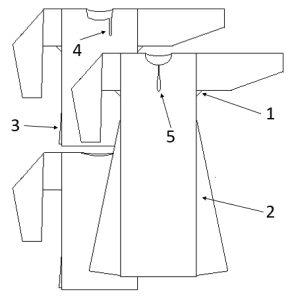 Materials:The tunics from Thorsbjerg, Lendbreen and Bernuthsfeld are all made of wool, the two first which are from the Roman iron age are both made of diamond twill, while the last consists of many patches made of many types of fabric (picture). Linen shirts are not known from the Vendel period or earlier, but linen is not an unusual material in finds (Bender Jørgensen L. 1986, pg 164).

These trousers should be close-fitting and might need som adjustments. Lengthen or shorten if needed.

Reconstructed using a find from a bog in Thorsbjerg in Denmark (Hald 1980; pg 329, also see picture and picture ) and finds from the back and crotch areas in Haithabu (Hägg 1984 (2); pgs 28-37, picture and picture). The trousers in Thorsbjerg are almost complete, so the reconstruction is quite certain, but they are several hundred years older than the Viking age. The crotch and back areas in Haithabu give us a possibility to say that the construction should be the same up to and including the Viking age. 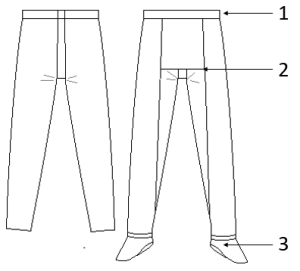 The wrap-over coat is mostly based on the finds of front pieces in the harbour in Haithabu (picture, Hägg 1984, pgs  73-88), but the garment is also found on pictures from the Vendel period, so called rider coats or warrior coats (picture). On the pictures the coats are always worn by men.

Materials: The remains of wrap-over coats from Haithabu are all made of wool in diagonal twill. They are lined with wool of the same type and the decorative edgings are made of a wool with a long pile that makes them look almost like a sheep fur. From England there is a find of a tablet woven band lying diagonally across the chest of the deceased in a grave from the 600’s (Walton Rogers P, 2007, pgs 210-213). It is interpreted as possible remains of a wrap-over coat. 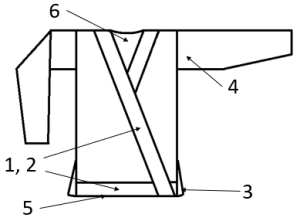 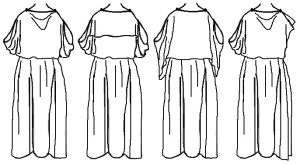 This is not really a pattern since a peplos is so easy to make, but more of a description of how to sew and wear a peplos.

The existence of a peplos is proven by the paired brooches that often are found in women’s graves. In the graves on Bornholm it is even possible to see that these used to have the same position as the tortoise brooches in Viking age graves and should thereby belong to a similar garment, but no remains of straps have been found so it cannot have been a smokkr. The paired brooces from the grave in Augerum have folded fragments of fabric under the needles on the back side, which would be consistent with how a peplos was worn. From the Roman iron age in Scandinavia there are at least three different finds which are interpreted as different versions of peploses – a bog find from Huldremose (picture) and texitle finds from the graves in Lønne-Hede (picture) and Hammerum (link). Together with texile finds from early Anglo-Saxon England on the back side of similar paired brooches they show a great diversity in how the peplos could look and be worn. The peplos from Lønne-Hede is more of a peplos-like top with a separate skirt, the one from Hammerum is short ans relatively close-fitting, while the large piece of fabric which is interpreted as a peplos from Huldremose is both long and wide. Depictions, especially gold-foil figures, from the Vendel period, show that full-length garments were most common, but we cannot see if the variety from Lønne-Hede was used then too. 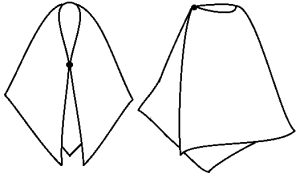 This is just as for the peplos not a real pattern, but a simple description of how a Vendel period shawl or cloak could look and be worn.

On Bornholm it seems like the women’s shawls often were made of fine, blue broken diamond twill of the type called the Birka type because it is so common in the finds from Viking age Birka. This is at least my interpretation based on which brooches these textile fragments have been found in connection with. The shawls could have fringes and be held together with a brooch. Shawls are also clearly visible on many gold foil figures, sometimes with fringes there too (Mannering U. 2006, pgs 61-64).

There are two archaeological finds of square cloaks from the Vendel period. One is the relatively well kept simple cloak belonging to the man from Bernuthsfeld, the one with the tunic (Schlabow K. 1976, pgs 57-58). The other are fragments from the boat grave Valsgärde 8 which are interpreted as the corners of a cloak (Arwidsson G. 1954, pgs 99-100). Both have fringes. Except for these rectangular cloaks can be seen on several Vendel period depictions, i.e. gold-foil figures (Mannering U. 2006, pgs 75-77). Fringes are visible there too. From the Roman iron age there are also several, sometimes very well kept, rectangular cloaks similar to the ones from the Vendel period (Schlabow K. 1976, pgs 50-69). Both Vendel period cloaks are striped or checkered, something that is missing on other textile fragments from the Vendel period.