Weaving a Piled Weave from Valsgärde

I must admit that I am in no way an experienced weaver, so this was a challenge for me. I decided to weave the test weaves on a warp-weighted loom, both because the original probably was woven on one, and because it felt most comfortable for me. Not that I am good at weaving on the warp-weighted loom, but I had just been to a course with Lena Hammarlund (among much more she has woven the reconstruction of the Lendbreen tunic) and had the basic techniques fresh in my mind. I had not woven twill on neither the warp-weighted loom nor a modern loom before so that was one of the challenges, another was that I had not woven a pile before either.

I had a lot of questions that I hoped that the test weaves would help me answer. Among these were:

Because of my inexperience I did not feel up to recreating the weave in the very thin yarns the original was made with. Instead I used Möbelåtta 8/2 as warp (a very strong but still relatively thin yarn) and single yarn of the same thickness as weft. For the pile I wanted something that was about twice as thick as the warp and weft, to have the same relationship as in the original, and had a high twist. I could not find anything suitable to buy, so in the end Iduna spun some very good yarn for me.

I decided to weave squares with pile in different techniques and with different densities. Each square should be at least as large as the original fragment, 4 x 7 cm:

This is how it looked. From this distance it is hard to see any difference between the squares, except maybe that the leftmost (square 4) has a thicker pile. It is actually much thicker than in the original while the others are much more like the original. With only one attachment point per pile thread there will be twice as many pile threads. This supports my analysis, indicating that there are two attachment points per knot/pile thread. 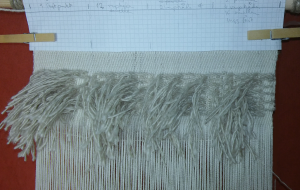 When I compared square 1 and square 3 and then looked at other pictures of the original, I realized that both version were “correct” and that the number of threads between the attachment points varied between 12, 16 and 20. 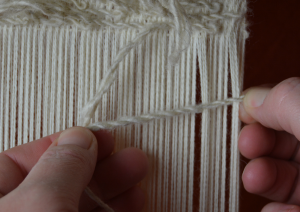 When I wove my pile it was practical to hold the folded end of the pile thread in one hand and the other ends in the other hand when I twisted the yarn and pulled the knot upwards. This created curly tails on almost all the knots. This technique was only useful when I had two attachment points, which further supports that interpretation.

I am left-handed and it was easiest for me to weave the pile from right to left. If I have interpreted the direction of the weave correctly, it should have been woven like this in the original too.

Now I thought that I had quite good answers to questions 2 to 5 above. Because I had used much coarser yarn it was harder to see if the warp density was right. I could not compare it directly, but I could compare the relationships between the warp and weft. According to my analysis it should be 40/8 = 5 and according to G. Arwidsson’s analysis it should be 28/8 = 3.5. In my test weave I could measure a warp density of 15 and weft density of 4 which gave 15/4 = 3.8, a number between the ones in the two analyses.

I have measured and compared my test weave to the original and it is clear that the difference between warp and weft density is higher in the original. This supports my analysis, but I would like to be able to weave with yarn that is as fine as in the original to be more sure.

I have got answers to most of my questions from the analysis and learned a lot. After this test weave I would say that it looks like the original definitely had two attachment points per knot and that it was woven with the pile around four warp threads at each attachment point, except for some places which may be mistakes. The attachment points typically had 16 warp threads in between, but sometimes it could be 12 or 20 threads instead. Missing warp threads and counting wrong were mistakes I made several times during the weaving, and with the much thinner threads and denser weave I am not surprised if they were made more often. I also believe that my analysis of the warp density (40 threads/cm) is right, but would like to weave more to confirm that.

My plan is to continue test weaving in the warp I already have in my warp-weighted loom to learn some more, and then it is time to plan for a weave with yarn as thin as in the original, or at least a lot closer.

My next post will be about the continued test weaving in the existing warp. I plan to look at the direction of the pile. Will it be different if I weave from left to right instead? And I plan to test picking up warp treads on a stick to see if that will make the bottom weft visible on the smooth side.

I would like to thank Lena Hammarlund for her clear instructions and advise on weaving on the warp-weighted loom (among others, forcing me to do a very simple tabby weave at the course), and Iduna Pertoft Sundarp who helped me a lot with setting up the warp and spun the pile yarn. And of course, Marie Ekstedt Bjersing who was my teacher on the course in Analys and Reconstruction, Weave at Sätergläntan, where this was part of my homework. It has been a privilege to learn from such knowledgeable and experienced teachers.