Home Articles Piled weave from Valsgärde 6 – analysis of the pile

Piled weave from Valsgärde 6 – analysis of the pile

This post describes the rest of the theoretical analysis of the piled weave from Valsgärde 6. I started writing it just after vacation, but the whole autumn has been chaos so I was never able to finish it. Right before Christmas I finally managed to finalize my report about this weave, and thereby also the course in Analysis and Reconstruction, Weave at Sätergläntan. So here comes, at last, the promised continuation of my analysis, hopefully soon to be followed by the results from the first test weaves.

Lets dig into the analysis with focus on the pile this time. Important information about the pile is length, type of yarn used, construction of the knots and density. In the piled weave from Valsgärde 6, the most interesting part is the construction of the knots which is quite uncommon. I don’t know of any other find made with this technique (Hint: If you know about any similar find, please contact me. I would love to learn about it). 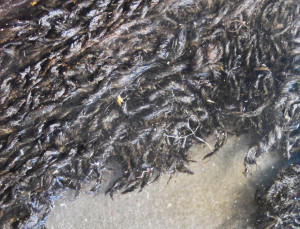 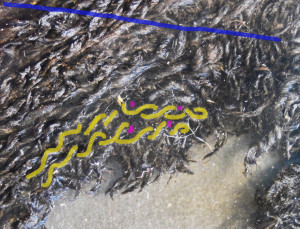 In both the pictures above and below the little “curly tail” at the right end of each pile thread is clearly visible. They seem to be present on all pile threads with visible attachment points and may give a hint to the construction technique.

On the smooth side the attachment points are easier to see, mostly because the pile thread is thicker than the weft and is twisted in the opposite direction. On the middle picture I have marked the visible parts of the weft with blue, and outlined the thicker pile thread with yellow. In most cases there is a weft below the pile in the same shed and the pile is, also in most cases, put around two warp threads. 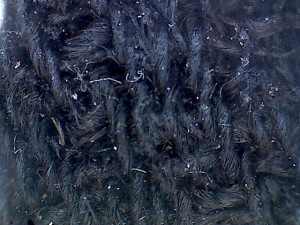 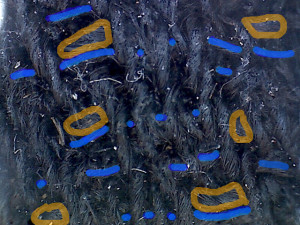 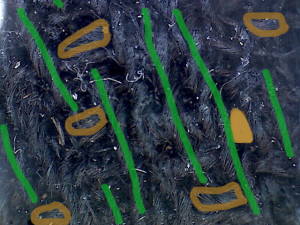 In the pictures above it looks like the attachment points are regularly placed, with eight visible warp threads (which means 16 warp threads in total, as we cannot see the ones in the front layer) and two wefts (including the one in the same shed as the knot) in between. Looking at other parts of the fragment, the distance between the attachment points vary between 6, 8 and 10 visible threads.

In summary it seems like the knots were made by folding the pile thread double, put it around two to four warp threads, twist the two ends a few turns, put one of them behind two to four warp threads again, 12, 16 or 20 threads further away, and then twist the rest of the pile thread ends together. When a row of pile threads are made like this, a bottom weft is made, the shed is changed and a new bottom weft is made before the next pile row.

The remaining length of the pile is at most 4 cm. It was probably longer when it was new, but it is not possible to say how much longer.

When this was done I needed to start weaving to be able to learn more about the weave, especially about the technique for making the knots, so the next post will be about the results from my first test weaves.